Interviews with St Louisans about what led to despair, neglect and vacancy in North St Louis and what led to the collapse of neighboring Mississippian city of Cahokia that was once the largest city in the western world until its collapse in the 1400s.

Levy visualizes the evolution of another environment in the wake of human vacancy in Mississippians, a surreal examination of architecture, urban planning, and impending ecological change. In this video, animals roam the streets, yards, and buildings of the Old North St. Louis neighborhood. Greenery spills out of windows, and sky is visible through deteriorating structures as the urban fabric appears to be overtaken by nature. The work’s title refers to the Native American civilization of the Mississippians, who built the large mound city of Cahokia just east of the Mississippi River around 1050. Cahokia was a religious and ceremonial center for Mississippian culture and ceased to exist around 1350. The exact causes for its decline remain unknown. Through the title, Levy suggests the layered history of place in the United States and how St. Louis was not the first city around this site. The empty streets and decaying buildings of Mississippians also reflect the social and political history of disinvestment in Black neighborhoods in American cities and the societal consequences of ecological change. Through symbolic imagery, Levy created a haunting meditation on displacement, memory, and the passage of time.

Old North St. Louis was founded in 1816 as a village north of the boundaries of the city. In the second half of the 19th century, it became a destination for Irish, German, and other European immigrants. In the years after the Civil War, African Americans settled in the area, fleeing violence in the South and seeking employment opportunities. In 1916, the city of St. Louis passed a zoning ordinance barring African Americans from buying homes on blocks with more than 75% White residents. While this ordinance was struck down by the United States Supreme Court one year later, race-restrictive agreements and deed covenants came to dictate intense residential segregation across the city and county, effectively restricting African Americans to certain neighborhoods, including in the Northside of St. Louis. Throughout the second half of the 20th century, local governments often designated historically Black neighborhoods as blighted areas, enabling them to be demolished or purchased under eminent domain for renewal projects that often never manifested. Since the 1950s, the Northside has suffered population and revenue loss due to these failed urban renewal initiatives, the construction of interstate highways that bisected communities, and suburbanization. Disinvestment and displacement continue to affect the Northside to this day.

Levy worked closely with members of the community of Old North St. Louis and local historians of architecture and urban planning. Adjacent to the projection of Mississippians channel 1, Levy presents another video that incorporates their narratives of the social history of the Northside. It features scrolling text, architectural drawings, and maps complemented by interviews with historians, professors, a poet, and a hip hop artist who are all connected to the Northside. These individuals share oral histories describing the area, their relationships to it, and how it has altered over the years. They discuss buildings that were important to them or their families that are now abandoned or demolished. They tell stories, both personal and historical, of how systemic racism, redlining, and disinvestment—orchestrated by those in power—has led to the current conditions in North St. Louis. They also look at the environmental implications of this history and what the future might bring, from nature growing uncultivated on vacant lots in the city to the possibilities of urban farming and what renewal might look like-  Hannah Klemm curator St. Louis Art Museum 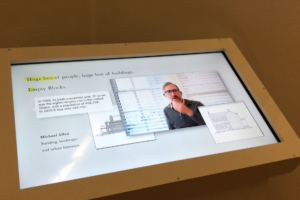 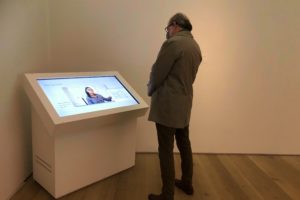 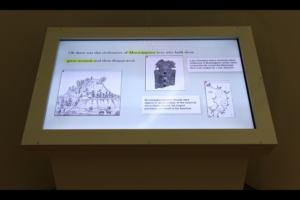 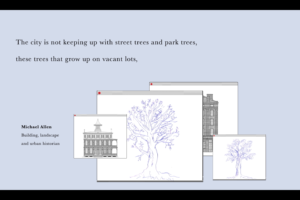 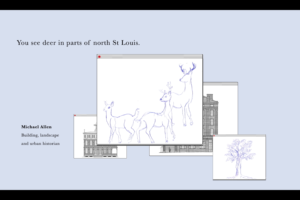 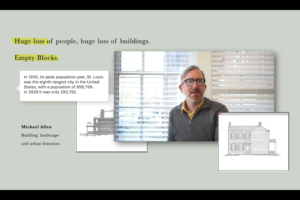 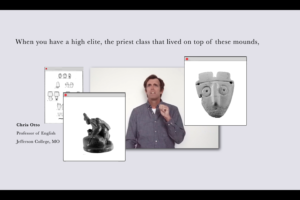 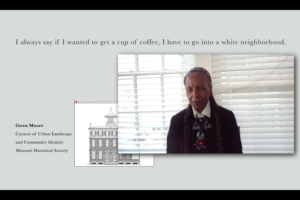 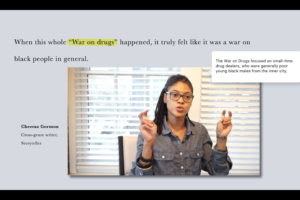 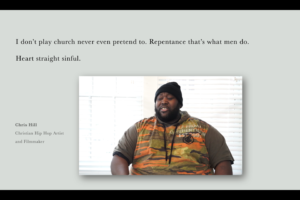