The point of departure for the video piece Impermanent Display was a pair of paintings by Giovanni Paolo Panini, Ancient Rome and Modern Rome (1757). These pendant paintings introduce the collection as a reflection of economic power and political force.

The Petach Tikva Museum of Art’s Collection is like other peripheral museums in Israel: a collection which holds works by both renowned and amateur artists.

With the blessing of the Museum and the Israel Antiquities Authority, I was given permission to take some one hundred mid-century works out of the collection storeroom, and suspend them on the walls of the Mazor Mausoleum archaeological site – a Roman tomb near Petach Tikva, for the duration of the filming. The totality offers a subjective, stratified picture of life in Israel in the state’s early years; a jigsaw puzzle combining influences of the cultural melting pot, Arab-Jewish relations, war and death, patriotism and the naïve desire to establish a social utopia.

Museum collections of various kinds are the object of artist Dana Levy’s ongoing, consistent study in the past decade. The point of departure for the video piece Impermanent Display was a pair of paintings by Giovanni Paolo Panini dating from 1757, Ancient Rome and Modern Rome, showing views of the city, old and new, through scores of paintings hung side by side, glorifying Panini’s patron, Count de Stainville, for his great riches. These pendant paintings thus introduce the rationale behind the collection as a re ection of economic power and political force, as a focusing lens which brings numerous sights together, a concept which later evolved into a model guiding many art institutions worldwide to this day.

The Petach Tikva Museum of Art Collection is similar in nature to those of other peripheral museums in Israel: collections which hold works by renowned artists alongside works by amateurs, and are essentially comprised of an assortment of sculptures, landscape views and abstract paintings, portraiture and documentation of local daily life. With the blessing of the Museum and the Israel Antiquities Authority, Levy was given permission to take some one hundred works from the collection storeroom, which were suspended on the walls of the Mazor Mausoleum archaeological site – a Roman tomb near Petach Tikva. The hanging mode was inspired by Panini’s paintings, but the featured scenes are fundamentally different, since the works represent a collection whose essence is the aforesaid mix of themes. The totality offers a subjective, strati ed picture of life in Israel as experienced and depicted in the state’s early years; a jigsaw puzzle combining in uences of the cultural melting pot, Arab-Jewish relations, confrontation of war and death, patriotism and the naïve desire to establish a social utopia here.

While the Museum’s collection is far from the European ideal of a hoard of masterpieces, in many senses this is where its power lies. Levy toys with this gap, stressing the assumption that the collection’s signi cance is not necessarily embodied in its intra-artistic value, but rather in its being a means to study and reveal the fantasies which characterized the decisive moment in the history of the State. Levy’s gaze shifts between the empathic and the ironic, the appreciative and the patronizing. Her lens does not delve into each of the individual paintings; rather – like Panini – she captures the whole, and leaves it up to the viewer to choose on what to focus. The collection items on display, hung on the walls of the Mazor Mausoleum in the faint nocturnal light, are shrouded by a mesmerizing mysticism which holds one’s glance. When the blinding Israeli morning light rises on them, a moment before the camera can no longer bear it, and the themes of the paintings grow clearer, we awaken from the magical illusion into the chaotic, violent, and complex Israeli reality 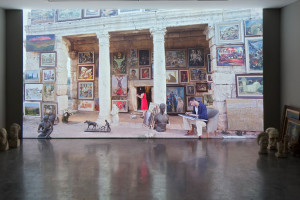 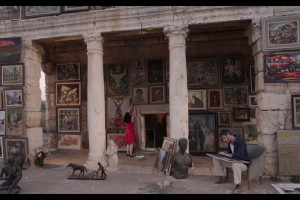 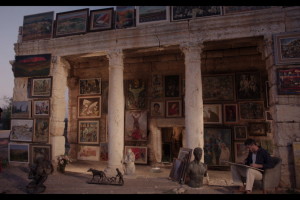 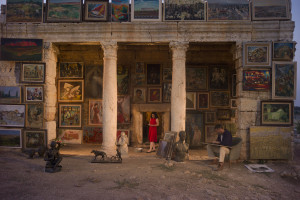 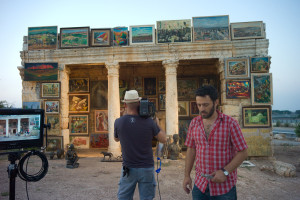 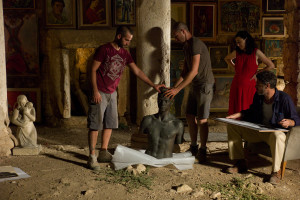 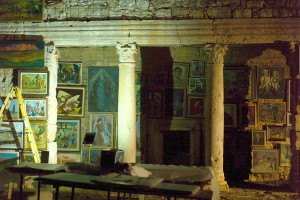 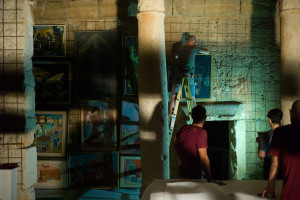 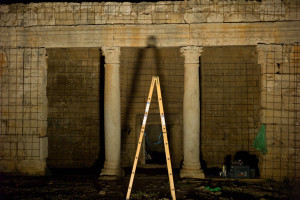 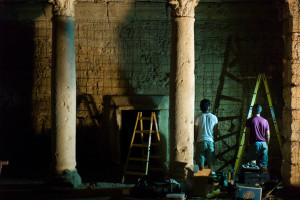 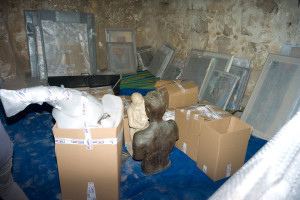 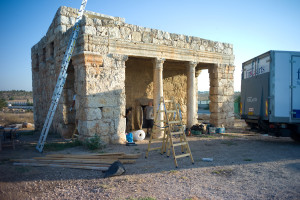