The story of European colonial culture is also told by her video Dead World Order, shot at a local museum, La maison de l’armateur (the shipowner’s house). This house is one of the few buildings in that coastal town to have emerged unscathed from allied bombing raids during World War . The museum’s collection contains hundreds of items previously owned by France’s nineteenth-century bourgeois aristocracy, ranging between exotic curiosités from faraway conquered countries, delicate china pieces, and, yet again, hunting trophies. Here too
a collection is created that reflects the desire to appropriate, catalog and preserve, however it is supplemented by a human figure – an elegant European woman who carefully handles the objects, with finesse and love. The woman, a curator in the classical sense of the word, guides the visitor and unveils to her the room of wonders under her charge, relaiting to it almost erotically. She moves back and forth in the spiral building and seems as a willing captive in her time tunnel. The work is replete with allusions and references to the films of Alfred Hitchcock – a melody from Psycho plays in the background, and the camera movements tracing the spiral interior evoke Vertigo. The mysterious woman is reminiscent of Hitchcock’s characteristic female typecasting, and, of course, there are the taxidermy animals. Levy, so it seems, uses this reference to highlight the futility of the act of collecting. In Hitchcock’s movies, the objects and art direction play a major role and are often instrumental to the progression of the storyline, or for creating suspense. The director coined the term “MacGuffin” to describe an object around which the plot revolves, but which usually has no actual significance, or turns out to be inane. All the objects in the shipowner’s house are MacGuffins, constructing a suspense that never materializes and a narrative-less plot. 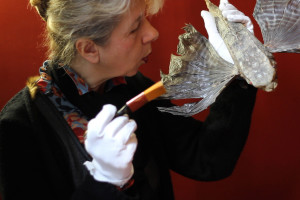 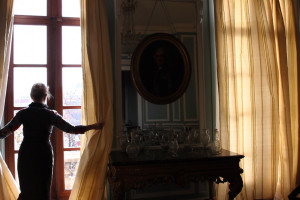 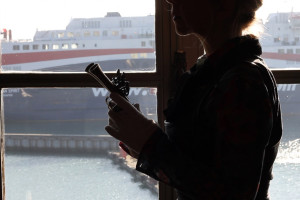 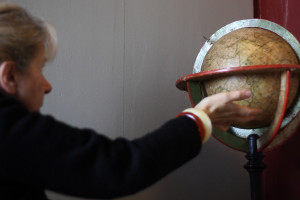 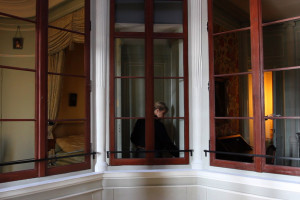